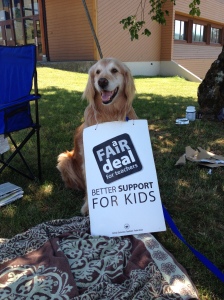 Now that’s out of the way, I can admit there’s one aspect that’s actually not so bad–the dogs. In particular, a couple of gorgeous golden retrievers who often accompany their striking humans. These canines provide a burst of positive energy few people can match.

I’ve gotten to spend enough quality time with each of them to learn three life lessons as demonstrated by golden retrievers.

1. Charge into every situation with tail-wagging glee! These dogs aren’t obnoxious, but they’re SO joyful it’s contagious. They approach everyone they meet like their new bestie, leaning in for a back rub here or looking up with those soulful eyes there. Hesitation or shyness? These pooches don’t know the meaning of those words (literally)! True confession: I sometimes avoid talking to people because I can’t imagine they want to be stuck chatting with me. I need to adopt a little of that golden self-confidence.

2. Roll in the dirt when the spirit moves you! Parker (the handsome guy in the photo) is ten years old–well into doggie middle age, but he hasn’t lost that puppy joi de vivre. Every now and then he flops down on his back and shimmies on the grass. His person says it’s a do it yourself massage. It must feel good–Parker’s bright eyes and big grin don’t lie. Does he look a bit silly?–Hell, yes! Does he care?–Hell, no! We could all use a dose of that golden enthusiasm.

3. Always carry a wet tennis ball! As much as I admire Parker, I don’t want to toss his damp, squishy tennis ball for him when he nudges it my way. He doesn’t care. (Honestly–is there a more good-natured creature on the planet than a golden retriever?) Parker keeps his ball near by and always knows where it is without getting neurotic about it. The golden rule of this little story–surround yourself with things that make you happy, but don’t get too hung up on your possessions.

4 thoughts on “The Golden Retriever’s Guide to Happiness”

DIY Campervan with our own style twist

A Flight of Fancy

How a Welsh terrier named Dylan turned my life upside down!

learning along the way

2 Teachers, their 2 kids and 2 chihuahuaish dogs navigate expat life from Bangalore, back to Denver, for the longest layover ever before moving to Grand Cayman...we hope.

ABOUT POETRY, ART, AND SOCIAL JUSTICE

A Little Bit of Texas in Swansea Wales

Tired of being ordinary, then here are some tips for becoming extraordinary.

at home in the hills

Life in the Black Mountains of Wales